The image was taken on May 23rd 2018 with Santos-Dumont crater in mind, a small ordinary crater (9 km) but near Apollo 15 and Luna 2 landing sites. The crater is named after the fellow countryman Alberto Santos-Dumont, inventor and aviation pioneer.

“Santos-Dumont is a small lunar impact crater that lies in the northern end of the Montes Apenninus range at the eastern edge of the Mare Imbrium. This feature was previously designated Hadley B prior to being given a name by the IAU. It is located about 30 kilometers to the northeast of Mons Hadley, a mountain massif. Also it is east of Rimae Fresnel, south of Promontorium Fresnel and southeast of Autolycus.

This crater is a circular, bowl-shaped formation that is situated atop a ridge in the Montes Apenninus. It is otherwise an unremarkable formation with no unusual features and little appearance of wear.

To the northwest of Santos-Dumont is a 90-km-wide system of rilles designated the Rimae Fresnel, being named for the Promontorium Fresnel that lies to the north of the crater. This last formation forms the northern end of the Montes Apenninus, and lies astride the gap that joins the Mare Imbrium to the west with the Mare Serenitatis to the east. To the southeast, in the valley past Mons Hadley, is the landing site of the Apollo 15 mission.

This feature is named in honour of the Brazilian aviation pioneer Alberto Santos-Dumont.” 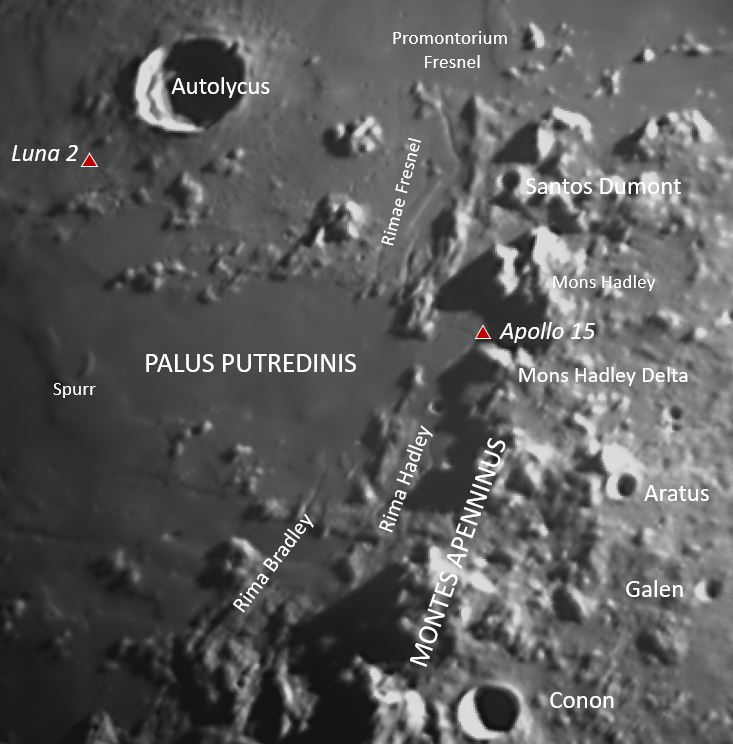